A consistent argument the NSA and its defenders have offered for the agency's behavior since 9/11 is that its mass surveillance and warrantless wiretapping programs are required to fight terrorism. One of the persistent fears of privacy advocates has been that these programs will be expanded into domains with absolutely no relation to terrorism. Now, the Obama administration has drafted rules that will allow the FBI and other agencies full access to the raw data that the NSA collects without any safeguards or privacy protections.

President Obama's new anti-ISIS messaging czar Michael Lumpkin announced the Center for Global Engagement this week, formed by Executive Order. The new government body is aimed at modifying the conversation around terrorism, extremism, and the West's overall profile. The initiative is distinct from past projects because it is aimed not at countering ISIS messages with US government ones, but at amplifying genuine, moderate messages throughout the Islamic cyber-world. Lumpkin told the Daily Beast that he sees this as a necessary evolution in the face of terrorist info-tech: "You need a network to defeat a network, so we're going to take a network approach to our messaging."

The government's most recent filing in the ongoing San Bernardino iPhone case was vitriolic in the extreme and contained a potent threat. In it, the Department of Justice noted that it could've compelled Apple to release its iOS source code and electronic signature, but that it had avoided doing this because it felt other solutions would be "more palatable" to Apple.

...Live your Own Life without Comparing it to others....#vmvdlt 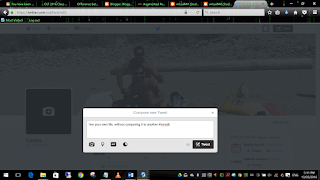 maurirere71@gmail.com
Posted by Unknown at 12:40 No comments: